The defence ministry has gone through several long-running acquisition processes for assault rifles and carbines but cancelled them all, most recently last year

Two days after yet another deadly terrorist strike in Jammu claimed six Indian lives, the government restarted a faltering procurement aimed at strengthening the firepower of the frontline infantry soldier, who bears the brunt of counter-insurgency operations and deployment along the Pakistan and China borders. | Today’s Paper

“In the last one month, to equip the soldiers on the border with modern and more effective equipment, the DAC has fast-tracked procurement of the three main personal weapons, i.e., rifles, carbines and light machine guns”, a defence ministry release stated.
The “Fast Track Process” of the Defence Procurement Policy of 2016 (DPP-2016), is directed at concluding an acquisition within a year.

Over the preceding decade, the defence ministry has gone through several long-running acquisition processes for small arms – which include assault rifles, carbines and light machine guns – but cancelled them all, most recently last year.

The core of the approvals accorded today relate to the infantry’s basic weapon – the assault rifle. Approval was accorded for procuring 740,000 assault rifles for an estimated cost of Rs 122.80 billion ($1.91 billion).

The ministry stated the rifles will be procured under the category of “Buy and Make (Indian)”. This involves buying a limited number of fully-built rifles from the chosen global vendor, who then transfers technology to India to build the bulk of the order in the public sector Ordnance Factory Board (OFB) and by private firms.

The DAC also approved procurement of 5,719 sniper rifles for long-range shooting by the army and the air force at a cost of Rs 9.82 billion ($153 million). Given the complexity of these high precision weapons, they will not be built in India; but procured fully-built under the “Buy Global” category of the DPP.

However, “the ammunition for these will be initially procured [from abroad] and subsequently manufactured in India”, said the defence ministry release.

The DAC also cleared the purchase of an “essential quantity” of light machine guns for an estimated cost of Rs 18.19 crore ($283 million). This initial procurement is intended to meet the immediate “operational requirement of the troops deployed on the borders… [while a] concurrent proposal is being processed for the [remaining requirement] to be procured under the ‘Buy and Make (Indian)’ categorisation,” said the ministry.
As Business Standard earlier reported (November 4, “Infantry to get foreign rifles, others to get ‘made in India’”), the government is proceeding on two parallel acquisition tracks to procure small arms at affordable prices. | Readmore

The Cabinet Committee on Economic Affairs has approved the construction, operation, and maintenance of the two-lane bi-directional Zojila Tunnel on Srinagar-Leh section in Jammu & Kashmir on Engineering, Procurement, and Construction (EPC) basis.

The construction of this tunnel will provide all-weather connectivity between Srinagar, Kargil, and Leh and will bring about all-round economic and socio-cultural integration of these regions. The project has strategic and socio-economic importance and shall be an instrument for the development of the economically backward districts in Jammu & Kashmir, the official statement said. | Today’s Paper

The total capital cost of the project is Rs 68.09 billion, including the cost of land acquisition, Resettlement & Rehabilitation, and other pre-construction activities as well as Maintenance and Operation cost of the tunnel for four years.

Infrastructure major IL&FS Transportation is likely to get the work for this tunnel as it emerged as the lowest bidder for this crucial project.

Four companies had bid for the project and IL&FS quoted the lowest amount, which is 10.7% less than the bid amount government had mentioned in the tender document. The project will be built on EPC mode in which government bears the entire cost and makes the payment during construction.

The project will be implemented by Ministry of Road Transport & Highways (MoRT&H) through National Highways & Infrastructure Development Corporation Limited (NHIDCL).

The main objective of the project is to provide all-weather connectivity to Leh region in Jammu & Kashmir which at the moment is limited to at best 6 months because of snow on the passes and threat of avalanches.

Addressing a press conference on Tuesday, the PTI MNA from Khyber Pakhtunkhwa announced to quit the party, calling for an inquiry into her allegations against the former cricketer, Geo News reports.

“I am not concerned about a party ticket or NA-1 seat. I did not leave the party over the issue of NA-1,” she said, adding that she had to go through mental agony due to the situation.

“Among many things, sending text messages is one of their bad habits,” she said.

“I received the first message in October 2013, you can check Imran’s Blackberry,” she said, adding that the PTI chairman “urges other women to use Blackberry cellphones so messages cannot be traced.”

“Check his Blackberry and you will know everything,” she added.

“The messages contained words that cannot be tolerated by any respectful individual.”

Gulalai further claimed that many women in the party are facing a similar situation.

Gulalai also alleged that Imran suffers from psychological issues and added that he does not like talented people. | Readmore…

The options: attacks by ground forces on Pak posts, strikes by aircraft, missiles or artillery guns 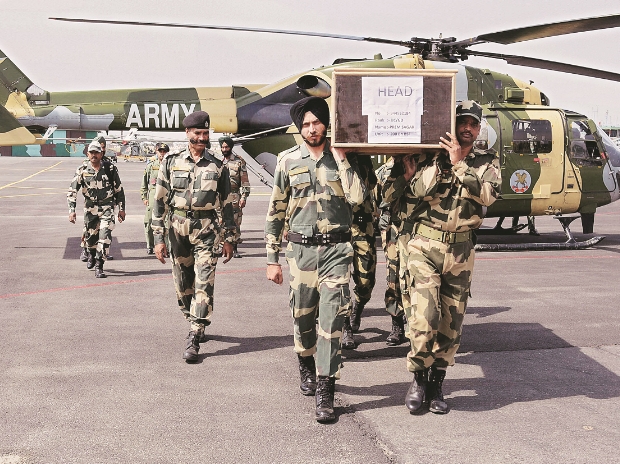 The army has begun weighing its options to retaliate against Pakistani forces on the Line of Control (LoC), after their troops, employing jihadi extremists, killed and beheaded two Indian soldiers near Poonch on Monday, top generals said.

Business Standard learns the incident took place when an Indian patrol of 8-10 soldiers was checking the border fence, a perilous task involving physically moving along the fence, very close to the LoC, to check that it has not been cut or its electronic sensors damaged.

According to the modus operandi of Pakistani troops on forward LoC posts, the exposed patrol first came under intense fire from automatic weapons, which Pakistani soldiers had stealthily deployed in temporary positions, just across the LoC.

With two Indian jawans injured in the firing, a “border action team (BAT)”, comprising jihadi fighters, darted across the LoC to the border fence. Covered by the Pakistan army’s firing, the jihadis killed the two jawans, beheaded them, and returned to their side of the LoC, bearing the heads as trophies.

The employment of a BAT is a well-rehearsed Pakistani tactic that creates deniability by using jihadis to cross into the Indian side. If any jihadis are killed or captured, the Pakistan army disowns it as an infiltration attempt. Regular soldiers remain on their side of the LoC, firing on Indian posts and patrols to cover the BAT’s move.

A range of retaliatory measures are being weighed by India’s generals, including attacks by ground forces on Pakistani posts, or strikes by aircraft, missiles or massed artillery guns.

The tunnel will bypass Patnitop, Kud, and Batote and will reduce traffic jams on NH 44 in winter

Prime Minister Narendra Modi on Sunday dedicated Asia’s longest bi-directional road tunnel on the Jammu-Srinagar National Highway to the nation. The Chenani-Nashri tunnel will cut down travel time between Jammu and Srinagar by two hours.

Modi was accompanied by Road Transport and Highways and Shipping Minister Nitin Gadkari and Minister of State for PMO and MP from Kathua-Udhampur constituency, Jitendra Singh.

The Rs 2,519-crore all-weather tunnel is equipped with world-class safety features and has been built in a record four years on the hilly terrain of Jammu and Kashmir, Road Transport and Highways Minister Nitin Gadkari had said earlier.

“This state-of-the-art 10.89-km tunnel between Udhampur and Ramban in Jammu and Kashmir, an engineering marvel on the most difficult terrain of the Himalayas, was built in a record four years,” the minister had said.

“The project will result in a saving of Rs 27 lakh per day based on traffic estimates and would cut the travel distance between Jammu and Sringar by 41 km,” Gadkari said.

He said the tunnel will be equipped with advanced scanners to ward off any security threat. The project forms part of the proposed widening of NH-44 (old NH-1A) from Jammu to Srinagar.

Here are some of the salient features of Chenani Nashri Tunnel Project:

This is a text widget. The Text Widget allows you to add text or HTML to your sidebar. You can use a text widget to display text, links, images, HTML, or a combination of these. Edit them in the Widget section of the Customizer.